Perhaps, but I not only survived the Dust Bowl Series, I had an awesome time! Would I do it again? Definitely. In fact, I’m planning to do the Appalachian Series in October — this time seven in seven states in seven days. Bonkers? Maybe, but I won’t be alone. In fact, there is a wonderful community of runners that develops at each of these series organized by Clint and Hanne Burleson and their Mainly Marathons crew.
Even some of my running friends ask how it is possible. My approach was to intentionally slow down, use run/walk intervals to keep my heart rate down and minimize the wear and tear day after day, visualize each day’s finish, embrace the experience, and take it one day at a time rather than thinking about the totality of it until the end of the last day. I trained by doing a lot of miles on a weekly basis and some back-to-back long runs, but I did not train for speed.
Doing a series of races was not new for me, though. In January 2014 I ran the inaugural Dopey Challenge in Walt Disney World — a 5K, 10K, Half Marathon, and a Marathon in four consecutive days. The toughest part of that was getting up so early each day so this time I did know what to expect in terms of early rising. And in August of 2013 I did a marathon in New York on a Friday followed by my first ultra the next day in Connecticut (a 50K or 31+ miles) so I had some experience with the marathon distance two days in a row plus travel.
But this series was definitely a whole new level. You just have to think of it as 26.2 miles at a time and not focus on the 131 miles over five days.
Much of the fun of doing these series is getting to know your fellow runners well. By the last day I was on a first-name basis with just about everyone that ran the entire series. Each course is a short out-and-back repeated anywhere from 9 to 16 times for the full marathon distance. That may sound awfully boring, but it’s not. The configuration allows you to see the other runners often and get to run alongside most of them for a period of time. It becomes just like a close-knit running club with lots of support and encouragement and shared stories.

I took a leap of faith ahead of time and posted on the series Facebook page that I was looking for a roommate and someone to share the driving from state to state. I ended up with a great traveling friend in Seth who was also experienced doing some previous Mainly Marathon races. He helped show me the ropes and introduced me to some of the regulars.

I also met the other Marathon Maniac with the same nickname — Rick “Roadkill” Haase. There are now over 11,000 Marathon Maniacs worldwide but just two Roadkills. I was hoping Rick wouldn’t be upset with me using “Roadkill” since he was a Maniac long before me, but Rick was more than gracious, and we had a great time getting to know one another during the series. There were many comments about the two of us running together. One of the more dubious comments when we were seen together was “roadkill coalescing.” Personally, I prefer “Roadkill Squared” or “RK2.” 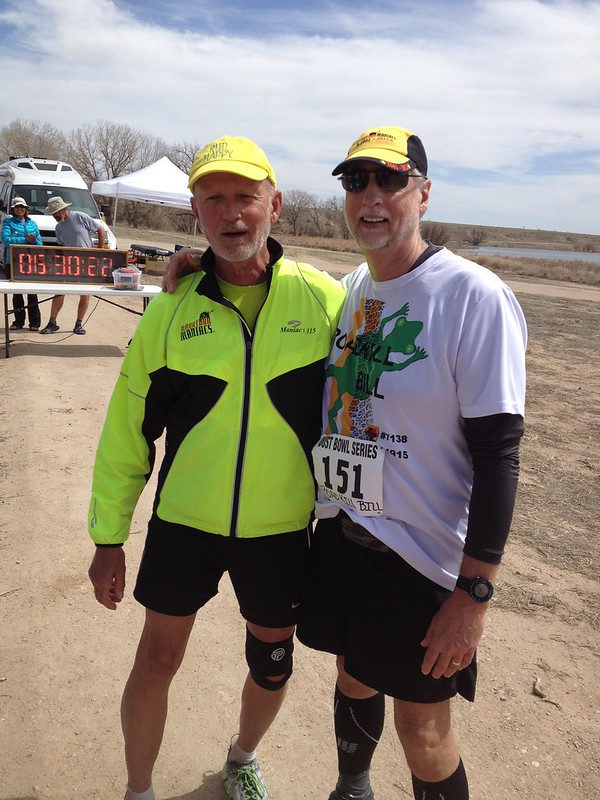 One of the unique features of a Mainly Marathon series is the food! Norm Duesterfoeft is the series cook and there is an amazing amount and variety of food! Because the courses are short out-and-backs typically less than 3 miles, there is just one hydration and food station at the start/finish area and no need to carry hydration bottles or gel packs. Runners are encouraged to provide one or two bottles for the hydration table (to minimize wasting paper cups) and the volunteers keep them filled with water or Gatorade per your request. Food is always available in bite-size portions and ranges from fruit to nuts to candy and cookies to pickles to brownies and peanut-butter-and jelly sandwiches to hot food like panini, soup, chili, and much much more. Each day, Norm has something special “cooked” up! In spite of the expenditure of energy, it is actually possible to gain weight during the series, and you have to be careful about spending too much time at the food table each time you finish a lap. 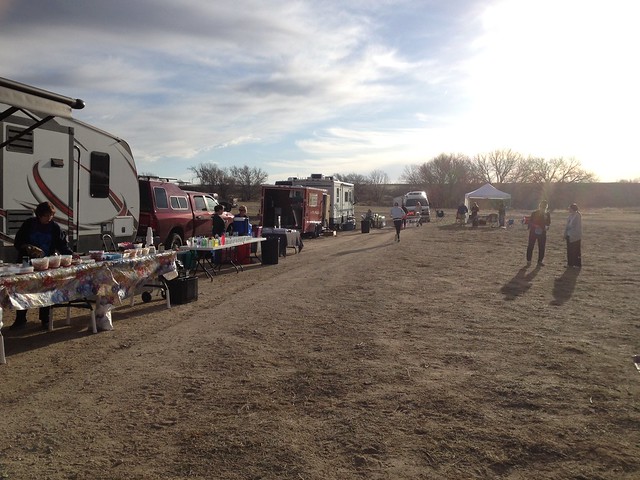 Fortunately, the Mainly Marathon races have no time limits and welcome race walkers. In fact, the last finisher of each half marathon and marathon are enthusiastically celebrated with the awarding of the coveted caboose — no matter how long it takes. I injured my foot early in the series and by the third day I had to slow down a lot — scoring the coveted O scale model train caboose and sharing the honor with my friend Phil as we finished together. Even so, chef Norm was waiting for us with a sandwich for the road.

Yep, I am definitely looking forward to October to do another series and catch up with friends I’ve already made and make many new ones. I should have 21 states completed after October, and this time, my wife and I will be traveling in our new-to-us RV so we can do some relaxed sight-seeing on the way home.

If you are working on completing a marathon or half marathon in all 50 states or are contemplating doing two or more races on consecutive days definitely consider a Mainly Marathon series. At this point, they cover all but 10 states (AK, AZ, CA, FL, HI, ID, NV, OR, UT, and WA) so at least one series is probably close to where you live or somewhere you’d like to visit. I can’t think of a better way to see the country!

Here are my notes from each day of the series…

The last day of the series also featured a drone filming us running during the early morning hours. Very cool!

One of the runners that ran all five days — Lynn “Cornbread” Forbus — made a video of his experience using a Go Pro camera. It gives a great sense of the experience as it happened. (about 30 minutes running time)

Over the next several days my wife and I visited Bandolier National Monument, the Four Corners, and Zion National Park where we did a lot of hiking and took many photos. We ended the trip by driving on to Anaheim for the wedding of close friends followed by a trip to the La Brea Tar Pits and a day at Disneyland. Sounds like a reasonable way to follow up 5 marathons in 5 states in 5 days, doesn’t it?

Where In the World...